Tablet computers, especially the iPad, are all the rage and most people are using them as entertainment devices but for medical people, they are increasingly important as one needs medical apps and references which run in tablet devices and may also need them when performing ward rounds in hospitals with EMR (electronic medical record) systems in place.
One of the problems with tablets is that they are cumbersome to carry around so I thought perhaps a labcoat which can accommodate a tablet like an iPad and additional devices would be useful. 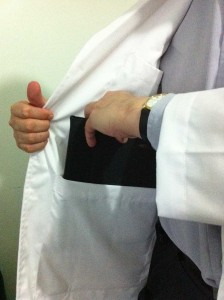 For more pictures and a mini-review, see the Palmdoc Chronicles