↓ Skip to Main Content
Home › - Nation › How many doctors are there in Malaysia?

How many doctors are there in Malaysia?

So how many doctors are there in Malaysia? It’s not difficult to find out the numbers and the data is out there if you know how to look for it (hint).

These are the figures I arrived at:

Number of Doctors in Malaysia vs Population and projected trend 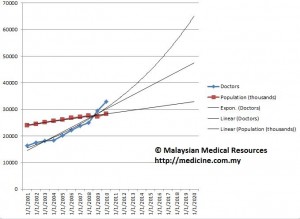 By the end of 2010, there were approximately 33,000 doctors in Malaysia, and for a population of 28.35 million, that gives a doctor to population ratio of about 1:850. From the graph, the number of doctors is increasing exponentially and the trend suggests we shall have about 65,000 doctors by 2020. The increase in population appears to be linear and by 2020, Malaysia will have a population of about 32 million. Therefore by 2020 the doctor:population ratio will be just under 1:500 which is well below the WHO recommendation of 1:600.
The Star reports that Malaysia hopes to attain WHO doctor-patient ratio by 2015 and from the graph, the estimated population in 2015 would be just over 30 million and number of doctors about 45,000 giving a doctor population ratio of about 1:670 – whether or not the goal of 1:600 is achieved by 2015 remains to be seen but it will depend on population growth and the number of medical graduates churned out.
Whatever the case, by the end of this decade, our doctor:population ratio will be equivalent to OECD countries.

We should not be concerned about numbers but we have repeatedly blogged about the need to maintain standards and quality of medical education amidst the current glut of medical graduates.