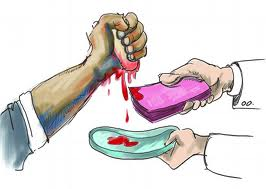 KUALA LUMPUR: Driven to the brink of desperation, a man has offered to sell his kidney to settle his gambling debts despite knowing that it is illegal.
A 45-year-old lorry driver from Ampang, who wanted to be known as Phuah, has priced his one kidney at RM50,000 to pay off a RM5,000 debt with loan sharks after an incurable spell of Internet gambling. He will then use the rest of the money to start a business.

Organ transplantation rules must be strict otherwise the weak and vulnerable (e.g. financially destitute, mentally impaired, prisoners etc.) could be taken advantage of.