↓ Skip to Main Content
Home › - Offbeat news › The monk made them do it!

The monk made them do it! 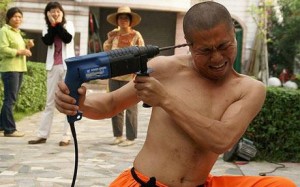 In what must be the strangest news of the week, it seems some medical students from USM have been Brainwashed into quitting by a “monk”

PETALING JAYA: A group of Universiti Sains Malaysia medical students has allegedly been brainwashed into leaving their studies by a Buddhist monk.
Young Buddhist Association of Malaysia lay adviser Chong Hung Wang said the student Buddhist association from the campus in Kubang Kerian, Kelantan, had voiced its concern that around 30 medical students had shown behavioural changes and disinterest in their studies after returning from a trip to Thailand with the monk in August.
“These students were led to believe that patients should not receive medical treatment for their condition as sickness is the result of their karma.
“They are convinced that they should not become doctors as the act of treating patients will interfere with karma,” said Chong.
It is believed that the monk had approached the students in March this year and had gained a following through religious activities conducted off-campus.
The monk also allegedly claimed that he had supernatural power and was able to tell the past and predict the future of the student

3 Comments on “The monk made them do it!”