The unhealthy state of the nation

Ok folks, listen up. 75% of us are lazy sods who do not exercise enough. 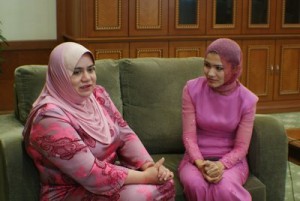 She said those who lacked exercise did not realise that they were exposing themselves to silent killer diseases like diabetes and hypertension due to an unhealthy lifestyle.
“In Malaysia, about 2.6 million of the population have diabetes, 5.8 million have hypertension and 6.2 million have high cholesterol levels.
“What is more worrying is that many people are unaware that they have these silent killer diseases,” she told reporters after launching the Ampang Hospital’s Customers Day, here, today.
Rosnah said the National Health and Morbidity Study 2011 showed the prevalence of diabetes rising by 15.2 per cent in 2011 from 11.6 per cent in 2006, and hypertension in adults aged above 30, up by 32.7 per cent in 2011 from 32.2 in 2006.
Rosnah said the rising figures were of concern and should be given attention by not only the ministry but also the hospitals, health clinics and the community.
“Besides practising a healthy lifestyle that includes doing exercise and having a healthy diet, undergoing health screenings is also important to reduce the incidence of diseases,” she said.

As an added incentive to get off your butts, cardiovascular fitness when one is middle-aged has been recently shown to predict healthy aging.

In this cohort of healthy middle-aged adults, fitness was significantly associated with a lower risk of developing chronic disease outcomes during 26 years of follow-up. These findings suggest that higher midlife fitness may be associated with the compression of morbidity in older age.

2 Comments on “The unhealthy state of the nation”