Yet another warning about Crocs and escalators 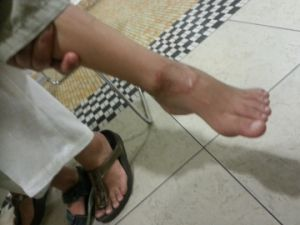 KUALA LUMPUR: A five-year-old boy has filed a suit against the official distributor of footwear brand “Crocs” over an incident where his foot got stuck in an escalator in a shopping mall. He was then wearing the popular foam resin shoes.
The boy, Abdullah Najib, is represented by his father Syed Najib Syed Jaffar Albar as the plaintiff.
Aside from the distributor Kinderdij Sdn Bhd, also named in the suit were Hitachi Elevator Engineering (M) Sdn Bhd and Bandar Utama City Corporation Sdn Bhd, the companies in charge of maintenance of the escalator and the owner of the shopping complex, respectively.
The writ of summons was filed at noon today by Tetuan Shukor Baljit & Partners at the Sessions Court at the Duta court complex.
According to the statement of claim, the accident at Centre Point shopping mall in Bandar Utama, Petalinag Jaya, occurred on Jan 31, 2010.
Abdullah, who was two years and eight months then, was walking with his mother when his left foot was suddenly caught between the skirt and the step of the moving escalator. He was wearing a Crocs footwear.
The boy’s feet was dragged a few metres towards the bottom until the escalator was forced to a stop. The escalator did not have a stop switch.
The document also stated that the boy was stuck for about one hour before fire and rescue team helped to get his foot out. He was then brought to a hospital for emergency treatment, where he underwent two operations for his injuries. He was warded for 33 days.
Among his injuries were several fractured bones, torn tissues and deep lacerations. He also walks with a slight limp, and his left foot is smaller than his right. It has also affected the development of the foot.

Back in 2007, we blogged about More warnings over ‘Crocs’
While shoe entrapment in escalators with these loose “flip-flops” is uncommon, when it does happen it can be disastrous. I think there should be warning signs placed in all escalators regarding this potential hazard.