Back in 2008 a Rumah Sakit literally became a Sick Hospital when QEH Sabah was declared Unsafe. Now FMT reports that 4 years down the line there are yet more delays in getting the hospital back to health. 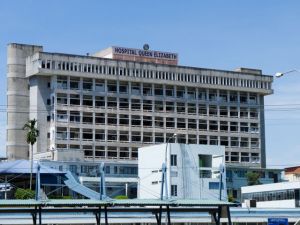 KOTA KINABALU: The federal government has again come under fire for making  promises to Sabah that it cannot keep. It happens at the end of every year and this year was no exception.

With scores of public service infrastructure projects pending and facing extended delays while on-going works proceeding at a snail’s pace, the opposition has had a field day criticising the ruling Barisan Nasional coalition for taking its often boasted “fixed-deposit” state for granted.

The Sabah Progressive Party (SAPP) pointed out this week that the Health Ministry has again had to acknowledge that it could not complete construction of the state’s main referral hospital – the Queen Elizabeth Hospital – on time despite extending its own multiple deadlines numerable times.

The party’s information chief Chong Pit Fah said the failure to complete the hospital’s main Tower Block reconstruction project on schedule had now become a perfect example or a hallmark of the struggling coalition’s inability to function efficiently.

Chong also called for a full investigation of the multiple delays.

He said that the extended delay necessitates the direct intervention of Prime Minister Najib Tun Razak himself as his ministers were proving to be incompetent.

The RM364 million project to build a 10-storey tower block to replace a tower block that was found “structurally unsound” commenced on June 7, 2010. The new building was supposed to have been completed by January this year, but was later deferred to end of this year.

However, checks this week showed the building is far from near completion. Chong said he had been informed by those in the know that the federal government was making plans to extend the completion date yet again.

What indeed are the excuses this time round? 4 years is way too long by any stretch of the imagination.