It’s not something new, and has been going on for years, but the recent RCI has brought this up again as reported by Malaysiakini

Many don’t pay their bills, and the healthcare costs eventually will have to be born by tax payers

Testifying before the royal commission of inquiry on immigrants in Sabah, Maria said the fees outsanding from foreign patients treated at government hospitals and clinics from 2007 to 2012 totalled a whopping RM21.7 million.

Hospitals and clinics however don’t turn away foreigners and the numbers keep increasing. 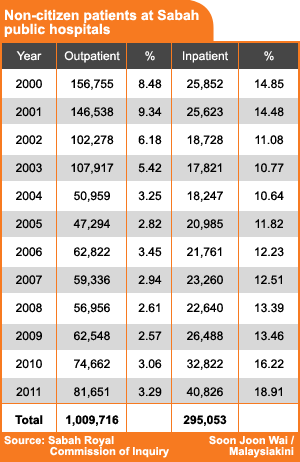 In 2010 and 2011, 54,283 Indonesians and 45,790 Filipinos received treatment at Sabah government hospitals.
“The numbers (of foreign patients) are very high… and there is a severe shortage of space in the hospitals.
“Our paid occupancy rates are very high, to the extent that we have to set up camp beds as there are not enough beds for inpatients,” Maria said.
‘We’re obliged to treat all patients’
From 2007 to 2011, a total of 491,071 non-citizen pregnant women and 472,452 children with non-citizen parents attended government clinics.
“This is of much concern, for our clinical staff also do house visits and it is a great burden to treat them all, including providing childbirth services at home,” she said.
While some non-citizens produced passports or working permits as identification, many of the patients were undocumented.
They would, however, provide contact details upon registration.
“But when we try to contact them at the address and phone numbers to collect the fees due, they are either no longer there or the numbers are not in service,” she said.
Maria said a Sabah Health Department circular in 2001 instructed the medical officers to report to the police when an undocumented migrant sought treatment.
‘We report, but no action is taken’
“We still do report but no action is taken,” she said, noting that the hospitals and clinics were obliged to attend to all patients, even if they were undocumented or have not paid their outstanding fees.

As a doctor in the Dobbs forum who has worked there quipped
“Old story – has been happening since last millenium when I was in Sabah.
e.g. Pregnant patients come over by boat from Pulau Sebatik and Tarakan to deliver in Tawau hospital. We even get referrals from Indon doctors for some of the patients. Sabah was and still is in a mess, RCI for what the Sabahans already know, only sounds surreal to those who hv not been there”