The story is, the Health Ministry’s DG, Dr Noor Hisham Abdullah created a Facebook page (which replaced his previous personal profile) – a good move in our opinion as it engages the public and doctors quickly and efficiently in this era of the social media.
An enthusiastic State Pengarah then issues a circular asking his subordinates to “Like” the page – apparently done without the DG’s approval 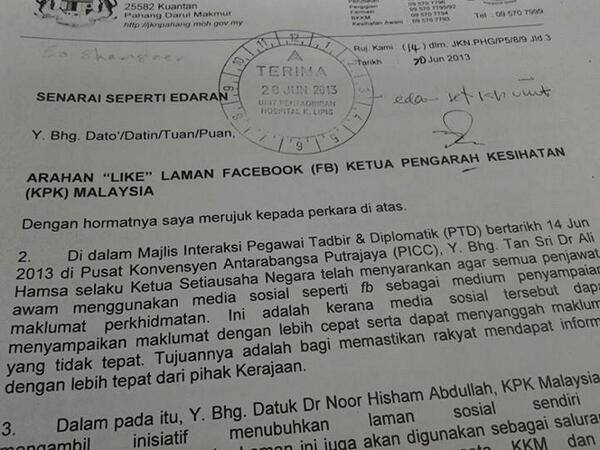 There has been, most unfortunately, a little Facebook storm which came out of this circular.
The said director has since issued a Public apology.

The Social Media is a two edged sword. It can be used and abused. Malaysians are also too easy with their comments and criticisms on Facebook – shooting from the hip and posting without thinking twice (or not at all). I suppose it is a reflection of the maturity of the society and it seems we still have a long way to go.

For doctors, the issue is also being discussed in this Dobbs forum thread