Do not abuse hospital staff 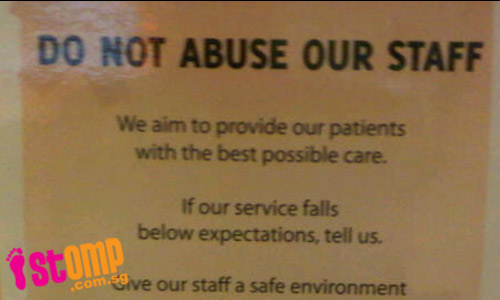 The above sign can be found in the Singapore General Hospital (source) and it’s sad that the public have to be reminded on basic civil behavior. Abuse of hospital staff is on the rise in Singapore and I dare say Malaysia too. Verbal abuse is one thing, physical abuse is another and deserves punishment. I am glad in this case, the ER staff made a police report

However, when the patient’s husband returned and saw his wife at the waiting area, he began hurling abuses at the staff for neglecting his wife.
“He kicked a wheelchair and continued his verbal assault.
“He refused to listen to our explanation and threatened to complain to the management.
“He wanted to take my photo and when I refused and held a paper to cover my face, he grabbed the paper and pushed me to a pillar,” said Ishdeep, who sustained bruises to her left elbow as a result of the incident.

We see bad behavior by patients and relatives now and then. It’s part and parcel of the job and indeed an occupational hazard. Hospital management needs to be sensitive to this and the stance that “the patient is always right” is not correct. Bad behavior is bad behavior and should not be condoned. Assaulting hospital staff is the worst form of abuse and should be punished.