Spotted in the Star Metro Central 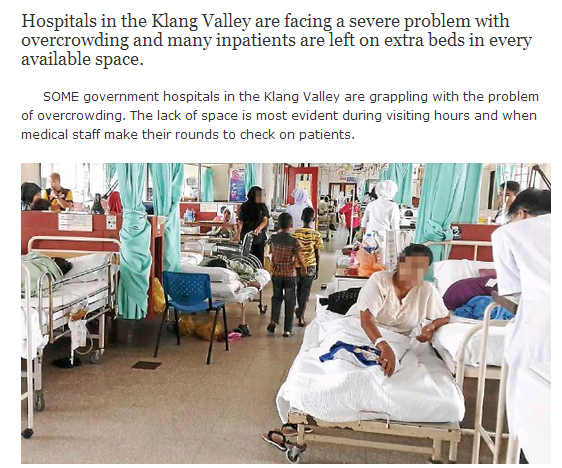 A StarMetro team went to the ground following complaints from members of the public who expressed their dissatisfacton over the overcrowded wards and found that Tengku Ampuan Rahimah Hospital (TAR) in Klang, Kajang Hospital and Kuala Lumpur Hospital (HKL) are among the hospitals facing the most severe shortage of beds to accommodate inpatients.
Further checks revealed wards packed to the brim with extra beds occupying every available bit of space, making it hard for visitors to walk along the corridors while visiting their loved ones.
Furthermore, two to five beds were added to each cubical to accommodate the high volume of inpatients.
Each of the hospitals is equipped with an additional 35% extension beds, which are more mobile than regular hospital beds.
Checks revealed that these hospitals, built more than 28 years ago, are running at beyond their maximum capacity in terms of number of beds.
TAR Hospital has a total of 893 beds with an admission rate of 260 patients daily, while Kajang has a total of 326 beds with an average admission of 64 daily. KLH has 2,115 beds with an average of 324 admission daily.
HKL recorded 118,286 inpatients last year followed by TAR Hospital with 95,000 and Kajang with 24,602.
HKL acts as the government’s tertiary referral hospital and has 83 wards and 2,115 beds with 80% occupancy rate.
Daily, an average of 14,000 patients seek treatment at the hospital and patients are never turned away.
Despite the manifold increase of population over the past three decades, StarMetro’s finding also revealed that the sizes of the wards and number of beds at TAR and Kajang have remained the same ever since they were built.
This is not helped by the fact that there have been no new hospitals built in Selangor over the past 10 years.

This is nothing new. Overcrowding of public hospitals, particularly in large towns and cities, has been going on for decades. Thirty years ago I recall canvas cots being used as “hospital beds” in Hospital Klang when the normal beds were insufficient. It is seasonal but it’s true when there are outbreaks of diseases like dengue, then the stress on public hospital wards is enormous.
The root of the problem is that the majority of Malaysians are still dependent on public hospitals because they have no means to fund healthcare in the private sector. It’s because for so many decades the Government has not addressed the basic problem of healthcare financing, depending on the public healthcare system as the “safety net” but unfortunately the safety net has lots of holes.
We have constantly called for healthcare financing reforms which should be the priority for any healthcare transformation in the country. We wonder if we have to wait another 50 years?