Holidaymaker returns from Malaysia with flat worm in her arm 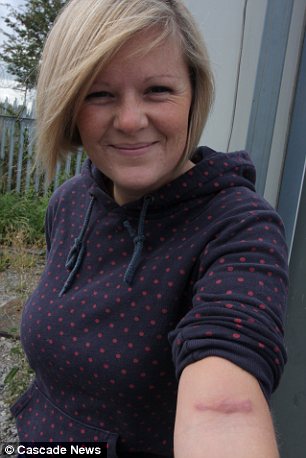 A holidaymaker returned from Malaysia with a six-centimetre flatworm lodged in her arm.
Emily Buckley, 28, now faces surgery to remove the parasite at the Liverpool School of Tropical Medicine.
Doctors treating Emily said flatworms, linked to undercooked fish and meat, are found in the digestive system but they’ve never encountered one in a patient’s arm before.
Emily travelled to the Perhentian Islands last May with her brother, Joseph Buckley, 25, boyfriend, David Phillips, 28, of Pen y Lan, and David’s friend, Kristoffer Owens, 29, of Borras.
David and Kristoffer were resident musicians at the Shari-La hotel, where the friends also stayed, and where Emily helped to prepare food for guests.
Baffled doctors originally suspected Emily contracted the ‘fluke’ parasite – a flatworm which usually inhabits the digestive system – after she rescued a 15-month-old pigtail macaque monkey and nursed it back to health.
Now they believe the most likely cause was contact with undercooked fish or meat. Emily said: ‘Doctors said they have never seen anything like this before.
‘They say that it’s lost its way around my body and has ended up in my arm. I think they’re going to keep it for research purposes after they remove it.’
The pub manager first noticed a lump in her arm in July. It is pain-free, except when doctors probe it, then Emily feels a tingling sensation.
‘It gets very itchy and irritable after the doctors have been looking at it,’ said Emily.
‘In Malaysia all of the locals were telling me I should get it taken out but I was in the island way of life and I couldn’t really be bothered.
‘Every day it was just growing, but it wasn’t painful so I didn’t think to get it checked out.’
Emily returned to the UK at the beginning of September when her GP referred her immediately to the Liverpool School of Tropical Medicine. There doctors also discovered a second parasite in her gall bladder and evidence of a third, different kind of parasite – eggs in her stool.
Emily can take tablets to remove these from her system.

Interesting case of Liver Fluke (Fasciola hepatica) infestation. Anyone encountered this before?
Moral of the story: cook your meat properly!

(Also posted in the CME/Case discussions group of Dobbs, the Doctors only community – registration is free for all Malaysian doctors)