The cost of medical indemnity

If you have been following our Facebook page for updates and links, you would have comes across our link to Dr. Tharmaseelan’s letter to the Star Medical negligence — a doctor’s insight.

There is no dearth of lawyers who are more than willing to act on behalf of a patient even on frivolous grounds. We cannot fault them as they are just doing their job. The judiciary too, has become less benevolent and has increasingly taken serious views of the cases before them. The awards are unbelievable and have been sky-rocketing over the years.

The Whitaker decision is now followed in Malaysia as pronounced in the Federal Court in Foo Fio Na. With the judiciary becoming more assertive and proactive, the awards are expected to multiply.

With the increasing settlements and awards handed out by the courts, litigation costs and premiums for indemnity coverage and insurance have risen exponentially.

The exponential rise in medical indemnity coverage is real. This is the trend for O&G specialists : 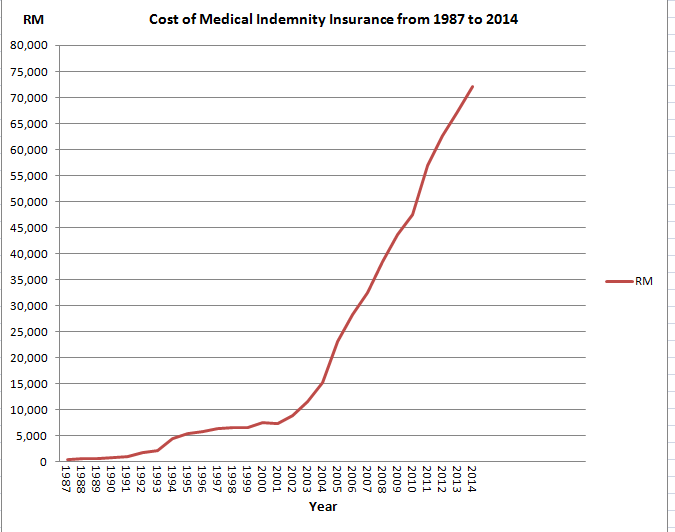 Imagine having to pay almost RM75,000 a year for malpractice insurance alone! If this trend continues, you would be hard pressed to find Obstetricians practicing in Malaysia in the future.
It is may be a discordance in patient expectation and the realistic outcome. It may be simply be a case mis-communcation. It may of course also be a genuine medical error – doctors are after all human. Whatever the reasons are, the trend is unhealthy and contributes to escalating cost of practice of medicine in this country where there will be more unnecessary tests and procedures done just to “cover all bases” whereas in the past common sense and good clinical judgment would have prevailed.

Doctors may be interested to discuss further in the DOBBS Medicolegal forum thread: Medical negligence — a doctor’s insight